Well, it was a very productive (although tiring!) week for us at Oshkosh!   We had literally thousands of people come by and try out Prepar3D and have a chat.  The total numbers to the show are pretty amazing.  EAA estimate that there were 541,000 people that attended the show during the week and nearly 1,000 aircraft on display!

The response to Prepar3D was just so positive.  A lot of people were very impressed by the application and the new features in it.  I also had the opportunity to meet with developers and solution providers.  There were actually a few simulation companies attending and a couple more just visiting.

A highlight was being able to talk to a lot of the kids that are really into aviation and want to learn how to fly.  The donation we made to the Young Eagles Program in their classroom will go a long way to allowing the kids to understand the principles of flight and get hands-on before getting into the real aircraft.    Lockheed Martin has a real commitment to Science, Technology, Engineering and Math (STEM) for  youth training programs and we hope to do a lot more in this area with the EAA.

I was also lucky enough to have a long conversation with Dale “Snort” Snodgrass.  A former F-14 pilot extraordinaire.  He is the pilot responsible for this (!): 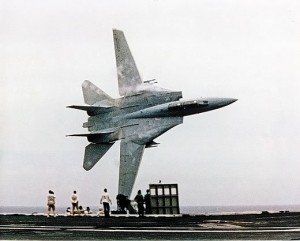 Dale dropped by the booth to have a chat about Prepar3D and he was excited to see the potential of the application.  He has some great ideas and hopefully we will be able to work together on making some of these a reality. 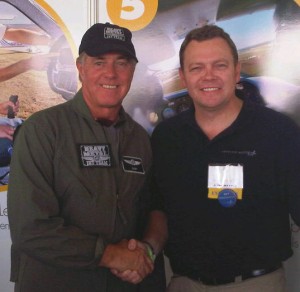 I did a couple of quick blog videos as well, so hopefully I will get these together soon!  All for now.